e are still surprised every day seeing new cultures and usages, but there are times that you have an even more intense and special contact with a culture. One of those times in which your enthusiasm and sense of wonder is overflowing is during a culture’s major festivals. That is what happened to us when we were in Penang, Malaysia.

Malaysia has a beautiful mix of different cultures and religions: Hindu’s, Buddhists, Moslims, Christians, Malay, Tamil, Chinese, European, etc… It is easily the most multicultural country we have ever been to. This is noticeable everywhere and gives extra colour and flavour to the streets. Of course, this multicultural mix greatly increases your chances of being around when a local festival is on. We were very lucky to be in Penang during Thaipusam, one of Malaysia’s most spectacular festivals.

This Hindu festival gives the old Straits city, George Town, a bit more Indian smells, flavours and colours. It is celebrated by the Tamil community around the full moon of the Tamil month “Thai”, this year on 3 February 2015. This festival commemorates the divine spear (“Vel”) given by Parvati, the wife of Shiva, to their son Murugan, who then empaled an entire army of demons on it. Of course the local Chinese community also happily joins in, the more gods the merrier (true religious tolerance in action).

The festival starts on Thaipusam’s Eve, 2 February 2015, and we decide to join in from the very start. On the first day the Lord Murugan shrine is paraded from its home, the Kovil Veedu (a.k.a. temple house) in the city center to the hill top Lord Murugan temple (a.k.a. the Arulmigu Balathandayuthapani Kovil), on a chariot pulled by two oversized and heavily decorated oxen. Alongside the procession’s route countless devotees are lined up to take part in the accompanying rituals. Elegant Indian women in their colourful saris with jasmin flowers braided in their hair, men dressed their best in shalwar kameez for the occasion, with sprinkled in between members of the other communities and visitors like us, all filled with anticipation.

Just before Lord Murugan’s chariot passes, the tension starts to mount and everybody starts taking their positions. Everywhere there are piles of coconuts, often coloured with curcuma and topped with burning incense. And as soon as the chariot is in view, everybody starts smashing coconuts like crazy splattering them all over the road as a symbolic crushing of one’s ego. We are right in the middle of this – messy but fun – ritual, the shreds of coconuts literally fly around our heads, and the milk splashes everywhere. Supposedly, about fifty thousand coconuts are smashed today in Penang. It must be the worldwide number one day for the coconut industry! Which they apparently happily exploit as coconut prices have a tendency to reach record heights in the days leading up to Thaipusam.

It takes a small bulldozer to clear the road from all the coco-nutty debris to allow Lord Murugan’s chariot to actually pass the faithful. And even then the chariot moves at a snail’s pace as throngs of people surround it and start passing gifts and items to be blessed by Lord Murugan. Plates filled with flowers, bananas, burning coconuts, etc… crowdsurf towards the beleaguered shrine. The attributes for the next day’s celebration are also brought forward to be blessed. To give you a little taste: it seems to consists of an awful lot of sharp hooks, spikes and spears. The second day promises to be even more spectacular! So after a full day immersion into wafting incense, Indian colours, coconut scent and contagious enthusiasm, we go to bed full of anticipation for the next day. 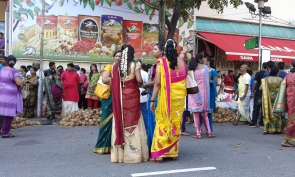 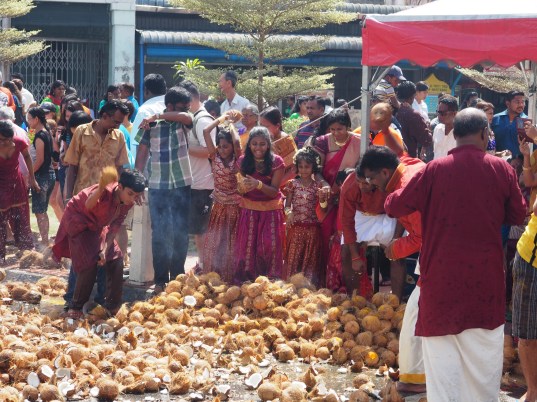 And the following morning already starts with a bang! Walking the streets on our way to the festivities, somebody asks us whether we are the people from in the newspaper? Hmmm, that could be … as yesterday we had twice been blitzed /interviewed by local journalists.

But that our interview would actually make it into the paper? It must be slow coconuts time for Malaysia’s newspapers… We head for the newsstand and yes, we are in the “The Star” and with a big picture no less. Regrettably, not with the most accurate of interviews nor names. Locally famous, isn’t it something.

This bodes well for the rest of the day, which should be even more spectacular than yesterday! On Thaipusam Day itself the Lord Murugan devotees go on a pelgrimage to the hill top Lord Murugan temple, often balancing all sorts of physical burdens (kavadis) on their heads or shoulders (mostly symbolical milk pots). But some go even further and do a special penance by walking the trail perforated with pins and hooks, pulling and bearing excruciating loads.

We go straight to the place where the craziest of the latter are being prepped for perforation. The excitement is palpable … everywhere groups of people form around a new devotee accompanied by stirring music. Drummers bring the penitent / devotee in a sort of trance and increase the level of excitement of the bystanders. The first one we witness being prepped for his extreme acupuncture session, starts off with some devotional rituals, burning of incense and praying after which he lies down on his belly. Somebody steadies his legs with a stick to keep them from involuntarily flaying about. Then the first hooks with rope attached to them are handed to the piercer. A piece of skin is pinched together and… SPIKE… swiftly transpierced. One by one a rows of at least 10 hooks are shoved in on both sides of his back. And with each empaled ripple of skin we feel a little more queasy.

But what is the deal with those ropes? This is clarified by the next victim, again surrounded by enthusiastic onlookers and musicians. A big though guy acting all cool, while spit is starting to leak out of his half open mouth. One by one the ropes attached to the hooks in his back are being un-entangled and straightened. And then somebody starts yanking and pulling them with his full body weight. You can see the hooks gripping the skin unnaturally far away from his back…. So it is not only the hooking that is the penance but also the counter-weight you attach to it while you struggle barefoot towards the temple. 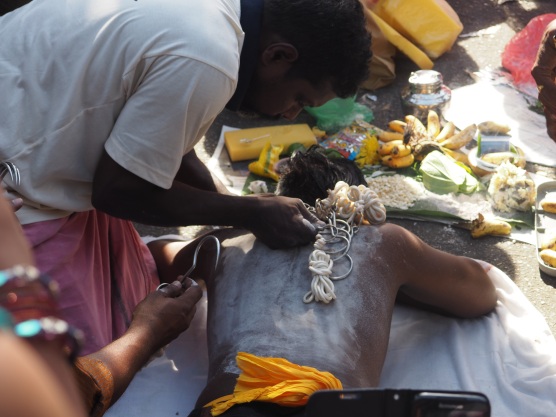 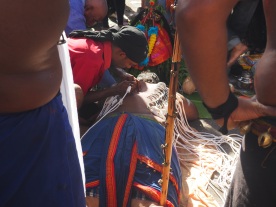 If you thought that was the end of it … though luck. We walk up to a group of really though guys, one even drinking a Guinness to get some (Dutch) courage and smoking a cigar. Drink a little, smoke a little, wave some incense around and then spike, spike, spike and his back is decorated with hooks. He starts to wave a bit more, but keeps up appearances. Some more saliva starts dribbling from his lips, while he slips further into a trance-like state… The tension mounts when a metal spear over a metre long is produced. What are they going to do with this absolutely sadistic looking implement? Increasing tension … the piercer holding the spear starts to get an evil look (muahahahaaa!) it doesn’t look good for our though cigar smoker. His jaw is locked between the trans-piercer’s fingers, his mouth forced agape, tongue pushed down and then the rod is gently placed on his cheek and … Do you feel it coming … Yes? He sure looks like he feels it coming… The face of the perforator starts to look more and more like an evil demon from a bad anime movie – and WHOOSH – the spear is jabbed through both his cheeks. You see the empaled devotee shrinking, swallowing, more spitting, more head bobbing… A spear through your cheeks sure seems to be more than a little annoying! 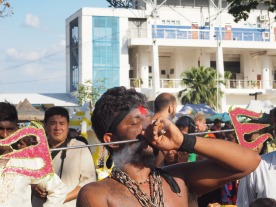 This way one by one these extreme devotees of Lord Murugan are dressed their “sharpest” and get into formation for starting their pilgrimage to the hill top temple. Some fully hooked with human counterweights, men with spears through their cheeks, spikes through their noses, tongues and/or lips, men who carry extremely heavy devotional ornaments in all sorts of fluorescent colours mounted on specially designed harnesses. The most impressive duo we see, are two bears of men, who are completely covered in hundreds of little hooks with little symbolic milk bowls attached to them, spikes through their faces and big hooks in their backs. These two don’t just carry any counterweight, they pull a complete float carrying lord Ganesha, a smoke machine, a little fountain and thousands of lights and of course the generators to keep it all going. It is probably a big honour … if that is any consolation.

Everywhere we go there is yelling, banging of sticks, drums and loud chanting of Vel vel vetri veeel, veel veel vetri veeeel!!! (“spear, spear, victorious spear”). It is all very stirring. It definitely encourages the empaled pilgrims doing their penance. There they go, men dragging people or whole floats behind them, colourful ornaments on their shoulder, spikes though their cheeks, on bare feet on their way to the temple. Luckily they don’t have to do this alone, the pierced penitents each have an enthusiastic entourage. Who not only provide mental support but also pitch in when they start to waver and dance around them to make it all more “bearable”. 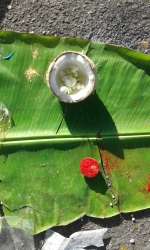 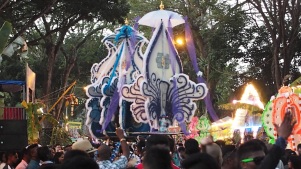 Vel veel vetriveeeel,  veeel veel vetriveeeeel!! We walk the rest of the day with the pilgrims, past stalls with free Indian food for sustenance, hastily erected little tempels, accompanied by loudly playing Indian music, wading through a whole mass of colourfully dressed and excited Indian-Malaysians. We take it all in and happily join in, while dodging dancing men carrying ornaments, human bullocks and colourful improvised ornament fights, etc.. By 10 PM we finally reach the bottom of the stairs to the hill top Lord Murugan Temple, where the though guys get un-impaled and get to take off their heaviest loads and where their wounds are treated with a type of white powder.

Everybody mounts the 512 stairs to the hill top temple. Veel veeel vetriveeel, veeel veeel vetriveeeel!!! The festive atmosphere and excitement keep on mounting after two days of trowing coconuts, offering flowers, burning incense, being impaled and making a pilgrimage come to a high point. It was an intense and fantastical happening where we returned from after midnight full of energy but still a bit tired. The locals keep on celebrating until the early hours, veel veeel vetriveeeel! 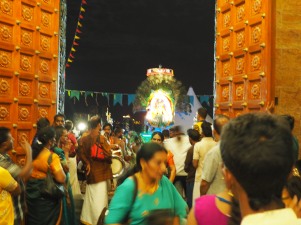 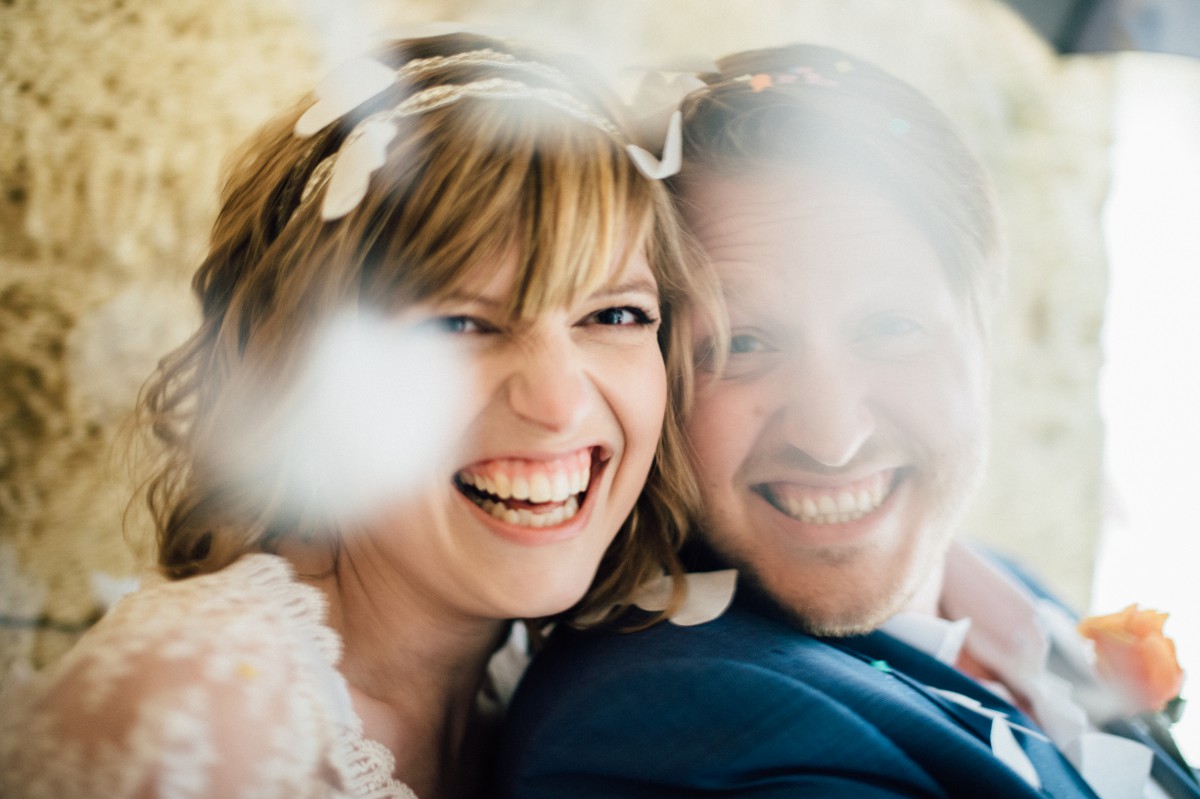 Two Belgians, Maarten & Katelijne. No house, no job, no plans. Just enjoying small things, travelling, housesitting and eating our way around the world. Click on our picture to know more about our story.

Where are we now? 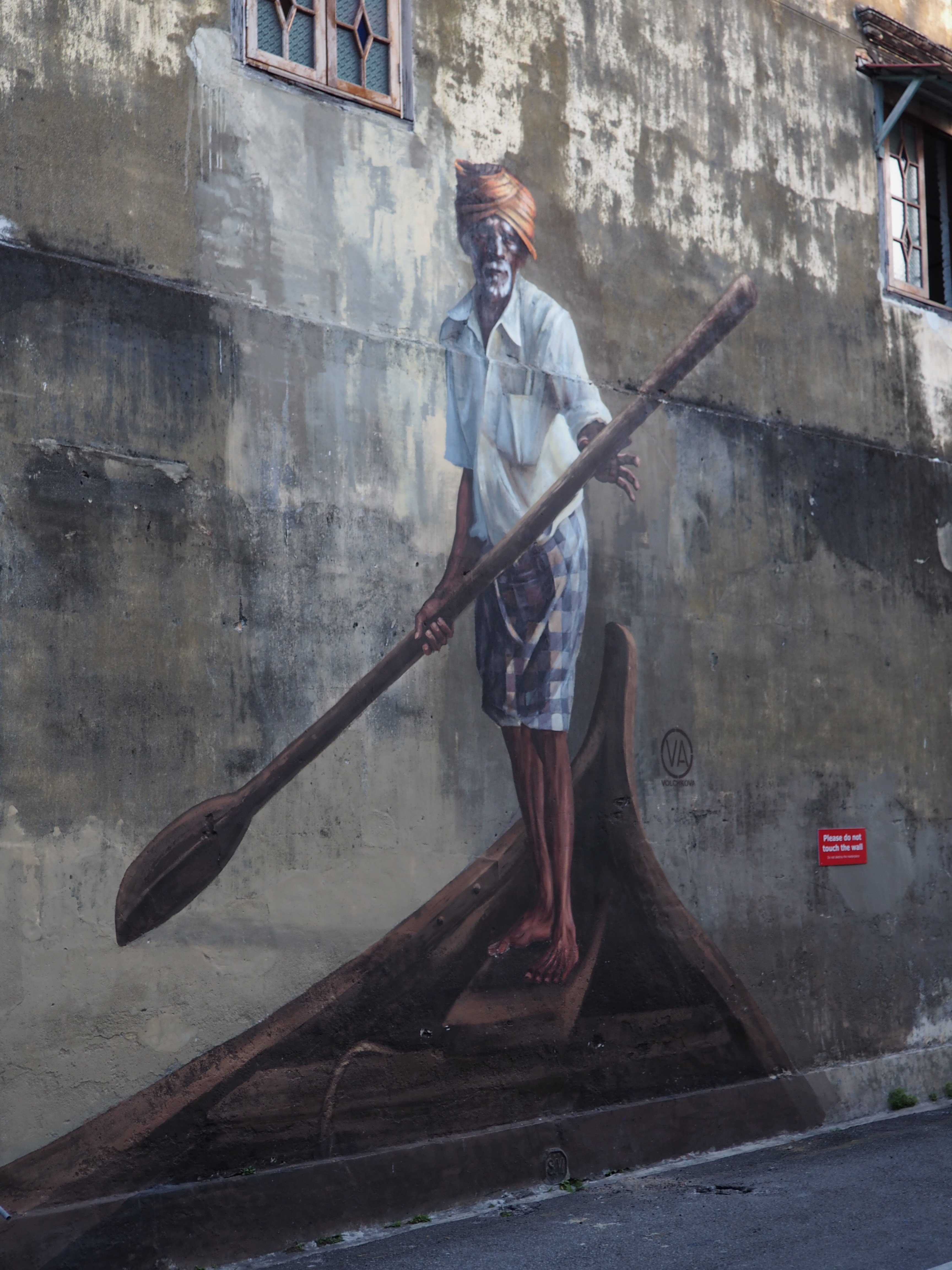